Why do I feel like an All Star? Because I’m preparing myself for 2009. What’s up with 2009? Well, that just happens to be the year the great city of St. Louis hosts Major League Baseball’s All Star game! It will be great for St. Louis, Cardinal fans, and sports fans in general. 2007 just got here and already I can’t wait for 2009.

“There can’t be a better baseball town in America,” Commissioner Bud Selig said.

I was bored so I thought I’d share with you the websites that are in my feed reader (which is Google Reader). They are:

I also have on my Google Homepage Wired Top Stories, Slashdot, BBC, and New York Times. All good reads. What’s in your feed reader?

This story originally appeared Nov. 2 in the satirical online newspaper The Onion.

ST. LOUIS — Calling Friday night’s victory on baseball’s grandest stage “a terrible mistake,” members of the St. Louis Cardinals issued a formal apology for making the playoffs, winning the World Series, and depriving baseball fans everywhere of a season featuring the kind of heartwarming, storybook ending to which they have grown accustomed in recent years.

They weren’t given a chance but they did it anyway! Congrats to the World Series Champs the St. Louis Cardinals! 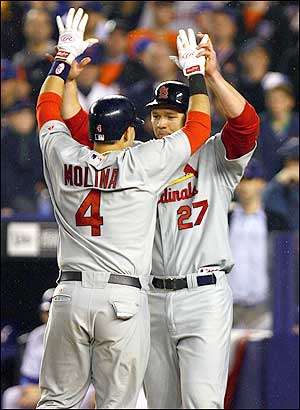 For the second time in three years the Cardinals are going to the World Series. Congrats to the team! Let’s bring home a championship in the first season in the new stadium. This year was a tough one for the Cardinals, a team plagued by injuries. Let’s see what these underdogs can do!