This is sad news for many in Cardinal Nation because Jocketty was one of the best in the business. He made some great moves and decisions with trades. Here is part of the story from StLToday.

The Cardinals will begin an intensive search today for general manager Walt Jocketty’s successor while still awaiting word from free-agent manager Tony La Russa about whether he will return to an organization suddenly in flux.

Jocketty had received no indication of a pending move regarding his status before DeWitt invited him to Wednesday’s 45-minute meeting.

Many within the front office were unaware of the move until the club issued a press release at about 3 p.m.

The move, which was first reported on STLtoday.com, occurred less than one year after the Cardinals secured their first World Series title in 24 years, but was more directly influenced by DeWitt’s installation of a new front-office model less than 13 months ago.

Jocketty’s refusal to embrace the new structure brought scrutiny that culminated in his ouster, according to DeWitt, despite a successful 13-year run highlighted by two World Series appearances and five trips to the playoffs the last seven seasons.

The Cardinals season is quickly coming to an end. They have not played well this season at all. Of course, you can’t blame the team entirely. Tragedy struck the Cardinals more than once. We had Mulder and Carpenter on the disabled list. Josh Hancock died in a car accident. Scott Rolen and Juan Encarnacion are out. (Juan may never play baseball again). The only thing that made this season exciting were the young players such as Chris Duncan and Rick Ankiel. The only thing I, as a Cardinals fan, can hope for is that the Cubs don’t win the division, or at least fall in the first round in the play-offs. Will Cardinals manager Tony LaRussa be back next year? I don’t know. I would like to see him back. I think St. Louis fans know that this season can’t be blamed on him. He played the best hand he could play in a season marked with injuries and death. 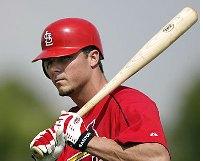 I was shocked that the Cardinals brought up Rick Ankiel already. They can’t send him back down because the Cardinals are out of options on him. If he would get sent back down, any team can claim him. I knew they’d bring him up, but I thought it would be closer to the end of the season, like in September. Well, I was wrong, and boy am I glad I was. Ankiel has been hot in the minors all year and he continued his streak in the Bigs. In his first two games he hit three home runs and made a great catch. What’s even better is it seems his hot streak as reinvigorated the rest of the team, finally waking up their sleeping bats. Today’s game versus the Dodgers brought 18 hits and 12 runs for the Cardinals. The depressed Cardinal Nation has also begun to make noise again. Everyone is talking about Ankiel, a St. Louis favorite, bringing some excitement back to St. Louis. There is some life left in the Cards after all.

According to multiple reports, Hancock’s vehicle hit a tow truck at approximately 12:30 a.m. CT and the pitcher died at the scene. He had pitched three innings in Saturday afternoon’s game against the Cubs. via StLCardinals.com

It’s weird because I just saw him pitch yesterday. Kind of in shock right now, as I’m sure the whole team is. My thoughts go out to his family.

My wonderful friend Heather and her fiance had an extra ticket to the game today and invited me to go along. It was the first time I’ve been to a Cardinals v. Cubs game. The tickets for these series sell out quickly, so I’ve never been able to go in the past. It was a fun time. Unfortunately the Cardinals lost, but that’s okay. We all know that the Cubs are Completely Useless By September. We can drop a few games to the lovable losers; the team that hasn’t won a World series in 99 years. I did get to see Puj-daddy go Jimmy-Jack (Pujols hit a home run), so that was cool. The seats were nice and the day was beautiful. I hope I make it to a few more games this season. I love being downtown and I love the new Busch Stadium. I took a few pictures and posted them up on my Flickr page.