A natural part of growing up for most of us is the loss of imagination. It doesn’t totally disappear, we just stop using it as much or start using it in different ways. Instead of imagining being an astronaut and flying to the moon we imagine that two-story house with the white picket fence. Our dreams are more down to earth. I think that’s why books that have magical qualities, books that stretch the imagination and push it to its limits are rare in books written for adults. There are obvious exceptions. For example, sci-fi and fantasy genres are full of magical and imaginative settings, characters, and adventures that take us to our youth. When you look at those books though, those are targeted to a specific set of people, people who never lost that great imagination. It’s rare that something will grab the mainstream and make us feel like kids again. The Lord of the Rings, thanks to the movies, found a new generation of fans. The Harry Potter series made adults remember what it was like to be a kid. Those seem to be exceptions to the rules though.

A couple years ago I read a book entitled The Iowa Baseball Confederacy. It was written by W.P. Kinsella, the author of Shoeless Joe (which became the excellent movie Field of Dreams). This is one of those books that is so over the top and out of reality that it makes you feel like a kid again. It makes you feel the magic as you read it. It’s not only about that though. No, not unlike Shoeless Joe, The Iowa Baseball Confederacy also has deeper meaning, and that is about a young man’s relationship with his dead father. The setting is in Iowa where a young man is trying to save his family’s legacy that a game played by the Iowa Baseball Confederacy All-Stars and the Chicago Cubs was played in 1908. No one remembers it ever happening, and there is no proof of this game ever existing, except in the main character and his dad’s heads. What ensues is a story so magical that you can’t help be caught up in it. It’s so good, I just started reading it again. Do yourself a favor, forget you’re an adult for a day, or maybe two, or three, and pick up this book, or any book that hits you with that same type of magic that you felt when you were a kid. It’ll be worth it, if only for a short while.

I saw that the school posted an opening for my job. Good luck to whoever takes it. They are going to need it. It’s hard to do this job and stay sane. No breaks at all. I even eat lunch with the kids. 7 hours non-stop of being with the kids. That’s a long time to be with the same kids without so much as a bathroom break or 5 minutes of time to take to yourself to preserve sanity. Oh well, in 5 more days it’ll all be over. I’m so excited for the school year to be over. I’m tired of the trouble-maker kids and this job. I’m excited about starting my new job. I’m looking forward to sleeping in an hour and a half later than usual. I’m excited to be in a job where I’m not drowning in deafening silence all day long; a job where I can listen to music, talk to co-workers, leave the building if I need to. All I have to do is get through the next 5 days. They are going to be long and hard, but I think I can do it. At least, I hope I can. I’m also excited for June because the hope of a new iPhone. My contract with Verizon is up near the end of June, so I will be buying an iPhone (if the new one comes out) and switching to AT&T. I can’t wait to get it. I don’t know what I’m more excited for, the end of school or a new phone. They both happen within a week of each other, so the excitement has built up considerably.

I’ve been in a reading mood lately. I don’t know what it is but I can’t get enough of it. Friday night I bought two books, A Good and Happy Child and The Husband.

A Good and Happy Child was a pretty good book by first time novelist Justin Evans. It’s a book that explores demons, both literal and figurative. The book seemed pretty good at the store and the reviews made it sound excellent. I have to admit, it was a pretty decent book. I enjoyed the way it was told, in the present and through journal entries about what the main character remembered from childhood. I was a bit disappointed in the scare factor. Some of the reviews were equating it to a modern Exorcist, but it wasn’t anywhere near as creepy as said novel. It was still a decent and quick read. I was able to finish it in a day.

The other book was Dean Koontz’s The Husband. This was on the bargain shelf, and I am a Koontz fan, so I picked it up. I really like the direction Koontz has gone over the past few years. He’s done less supernatural-type novels and done more thrillers. This was a great thriller that kept me turning the pages wanting to know what was to happen next. The only disappointing thing in the book was how quickly everything was resolved. Usually Koontz is fast at conflict resolutions, but this one seemed too easy. Too fast.

Yesterday I went to Barnes and Noble because Chuck Palahniuk came out with a new book called Snuff. I also noticed that Koontz came out with a fourth book in his Odd Thomas series called Odd Hours. I’m almost finished with Snuff, which is classic Palahniuk, and can’t wait to start Odd Hours. I’ve basically been reading a book a day for the past five days. I can’t get enough.

I was given an invite to Dropbox. In a nutshell, it’s an online storage service that allows you to sync files across multiple computers. I’m syncing files via my PC running Vista and my MacBook running Leopard.

The service is very easy to use. You download the application and install it. In Windows it creates a folder in My Documents called My Dropbox. You drop any files in there you want to put on the server and it automatically uploads them. 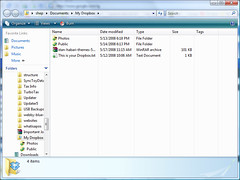 Once you have files uploaded to Dropbox you can log into the Dropbox website and view the files using the web interface.

On the Mac, the Dropbox app adds it’s location to Finder, much like the .Mac iDisk does.

As soon as the files have been uploaded from one computer they will sync to all computers running Dropbox that are linked to your account. This came in handy for me when I downloaded a Habari theme on my PC but wanted to test it out on MAMP on my Mac later in the day. I didn’t want to remember the link or upload the file somewhere else, so I just placed it in the My Dropbox folder on my PC and when I booted up my Mac it automatically downloaded it in the Dropbox folder on my Mac. Very simple.

You can also put files in a public folder that is accessible from a link. Right click the file and go to the Dropbox subfolder and choose “get public link” and you will be able to send that link to anyone you want to view the files. Right now Dropbox is in private testing phase, but I can already tell that this is a great idea and the simplicity of their solution makes it a winner. They give you 2gb of online storage space. I can see them charging for more space in the future, which if you are someone who is on multiple computers a lot and want to keep track of files, say from home to work, this will be an ideal solution for you. I can’t wait to see where they go with this. I also have a few invites if anyone is interested in trying it out. Just leave me your info in the comments.

As I look back, I realize this school year passed relatively quickly. Yeah, during most of the year it seemed like the days crept by, after all, I do deal with the troublemakers. It has gone by fast though. Time is running out for next school year and next thing I know, school will be starting again. I needed to start looking elsewhere because of the lack of opportunity in the district and my desire to never do this job again, now was the perfect time to move on. Will I come back to education? Maybe some day down the line I’ll come back to the field, but for the immediate future I’m going to be putting all my time in energy into this new job.