A couple of weeks ago Kottke posted a video showing the American counterparts for each British actor who has played Doctor Who. The video was based on the actors chosen by Smug Mode. Each actor is a perfect fit for the role, including, surprisingly, Community’s Donald Glover. Watch the video below. 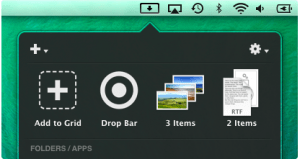 One of my favorite Mac apps over the years has been Dropzone. It’s a simple app that sits in your menu bar and allows you to perform a variety of actions with ease. It was recently updated to version 3 which brought a lot of new features.

Some of the coolest new features include more actions, the organize your actions how you see fit, and Drop Bar. Drop Bar allows you to drop files to the Drop Bar and then drag them to use in other apps/folders. It is a great way to move files around the Finder without having multiple Finder windows or tabs open, something that comes in very handy if you’re using a Mac with little screen real estate.

I was sold right away on the new version of the app. That being said, I was a bit disappointed when I installed it and saw my most commonly used actions, Install App, was no longer available. What Install App did was allow you to drag a zip or DMG file to Dropzone and it would install mount the DMG, move the app to Applications, unmount the DMG and delete the zip or DMG file. It tools a multi step process and shrunk it down to one step. So, why was this action missing? Sandboxing. Apple’s sandboxing will not allow you to run scripts like the Install App, for security reasons.

I can’t recommend this app highly enough. If you’re looking for an app that will make your life easier, I strongly suggest you try it out.

Short. Classy. Optimistic. There has been no better speech in sports than the one given 75 years ago today from Lou Gehrig.