One of my favorite artists over the past 10+ years has been Kansas City rapper Tech N9ne. I was first introduced to him in High School by my friend Leon. Since then I’ve been following his career closely and have been amazed at his success, including appearing on Forbes’ list of most successful rap artists. I even interviewed him in person for a Midwest hip hop website while I was in college. This week Tech appeared on Tiny Desk Concert on NPR. Watch the video below. It’s a pretty stellar performance. 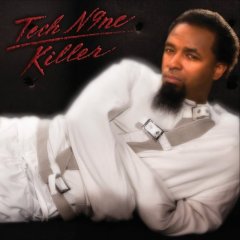 Kansas City, Missouri’s Tech N9ne recently came out with a new album entitled Killer. With each new album Tech reaches more and more people and gets closer and closer to the mainstream. This album is the closest he has ever been. He is selling out shows all across the United States, hooking up with major rap stars, and even has had his video for Bout ta Bubble, from his last album, on MTV. His new album debuted at number 12 on the charts, a very respectable debut for someone who is independent in every sense of the word. He has not had any promotion on TV or radio for this album. All the promotion has been in interviews in magazines and his amazing performances at shows.

Tech N9ne is definitely rewriting the books on being an independent rap superstar. You need no look any further than Killer for proof. Ice Cube, Paul Wall, and Scarface are a few of the bigger names that appear on the two-disc album. You can even tell that Tech is reaching for the mainstream with his selection of beats on the album. It’s not his best album, but has several great songs in the 32 track set. The best song on the album, in my opinion, is a song in which Tech does what he does best. It’s a song in which Tech takes us on a trip into his psyche and let’s us into his deepest emotions. This song is about how he wishes he could cry just once. Everything would be better if he could cry and the tears could wash away all the bad things in his life. It’s a pretty deep song and it’s not every day you hear a rapper talk about crying, let alone wishing they could cry. Have a listen and purchase the album.

After seeing some other lists of favorite albums, favorite hip-hop albums, and favorite albums of 2005, I decided to make a list of my favorite hip hop albums of all time. One thing I should note before writing my picks. I am a product of the new school. I started to listen to rap in the early ’90s, so that is when my picks will start. While I recognize the fact that many hip hop classic dropped and paved the way for future classics, I can’t really judge those as if I listened when they first came out. Eric B and Rakim’s Paid in Full is a great album. Definitely a classic. The problem arises when I compare it to the music I grew up on. The beats were old and the content of the lyrics derives from the ’80s. Remember, I was born in 1983, so I can’t even begin to relate to many 80’s classics. I recognize the impact of Grandmaster Flash and the Furious Five or Slick Rick, I just experienced them much later than I should have. To put this in context, let’s look at the movies Reservoir Dogs and Pulp Fiction. People who were wise to Reservoir Dogs usually think that is the better Tarantino movie. Those who saw Pulp Fiction before Reservoir Dogs don’t quite grasp the genius of Reservoir Dogs that made Pulp Fiction so great. That is my dilemma here. My hip-hop experience is like watching Pulp Fiction first and then Reservoir Dogs, not realizing that everything that Pulp Fiction is credits back to Reservoir Dogs and thinking that RD is the inferior movie. (I do realize this, but it makes my explanation simpler). So now, on with the list. (these aren’t in order)

Well, that’s it for now. I know I can add more, but I’ll leave it at that for now. Make sure you check out the following albums, as they are also some of my favorites: