On Father’s Day we all took a trip down to the city to look at the progress of the new Cardinals baseball stadium. This picture sums it up. Three generations of Cardinals fans. Me on the left, my nephew Cameron in the middle, and my dad on the right. 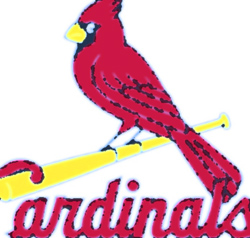 Let’s hope its a great one!

So, it looks like you can only buy 4 tickets for the St. Louis Cardinals vs. Springfield Cardinals games on April 2nd and 3rd. I would need six. Not only that, but they are only selling 1500 to each game. So, basically, I’m not going anymore. This sucks, I was really looking forward to it.

Oh well, there’s always StL Cardinals Baseball this summer. I plan on going to quite a few games.

Can someone please buy me a brick? I would love one. It would be great to have my place “cemented” in Cardinals history. Cardinals Bricks: Paving the Way to the New Stadium.

If you want to know what to inscribe, something like:

if you have any suggestions on what to put, let me know. Hurry, space is limited!

SMSU played Creighton University last night. In the past, Creighton has always dominated the Bears. A lot has changed since last year though. Many of Creighton’s best players of years’ past graduated. I wasn’t expecting an SMS win, but that is what was delivered. This was the first Bears basketball game I attended this year, and I was surprised at how many of our guys graduated last year as well. The Bears dominated all of first half, playing excellent defense. The second half was typical Bears basketball. They let their lead slip and played some bad defense. They managed to hold onto the lead though and not even their terrible free throw shooting percentage and Creighton’s excellent ability at the 3-point shot could stop the Bears.

Worldpress: What is it? Well, it’s wordpress users across the globe. Check it out here, it’s really cool.