No, you are not dreaming. There really is a Saved by the Bell board game and it looks amazing. Well, it looks like it would be fun to play once or twice until your friends stop playing with you because you know way too much about the TV show and it is no longer fun for them. From the description on Pressman’s website:

Your homework assignment: Be the first player to collect one of each Character Card, or 3 Character Cards of the same player. Once you spin “View a Scene,” you’ll have a few seconds to glance at snapshots of classic scenes from the show. Be prepared to answer random questions. So, study up and don’t flunk this memory test to win a Character Card!

If you spin a number, you must move your character that number of spaces on the board. You can land on “Time Out” and steal from your fellow players. You’ll even receive your own Yearbook to collect your Character Cards, but don’t doodle on Zack – you must be focused to get an A+! Once you’ve collected one card of each Character or three cards of a single Character, you’ve won the game and you’ve been… Saved by the Bell!

You can pick the game up from Target. If you’re not sure if the game is for you, check out the instructional video on how to play. 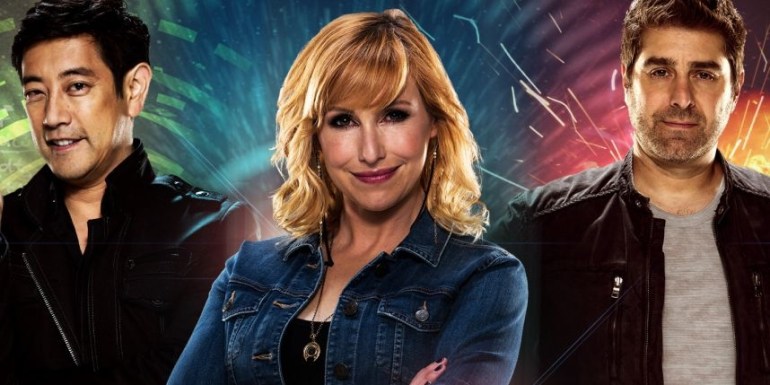 Netflix released a trailer for their new show White Rabbit Project today. If you were a fan of Mythbusters, you’ll probably want to check it out. It stars the former Mythbusters build team, Kari Byron, Tory Belleci, and Grant Imahara as they go down the “rabbit hole to investigate weird and wonderful events from pop culture, science, and history.”

I was a huge fan of Mythbusters and was sad when they decided to part ways with the build team in the final season. I’m happy to see the gang back together. You can stream all episodes starting December 9th. Check out the trailer below.

A couple of months ago I decided to do something I never thought I would do. I cut the cord. Sort of.

In December I decided to cancel my cable. The bill was getting too high and I have been watching less and less traditional TV. Many of the shows I watch over the past few years have ended or I lost interest in them (looking at you The Walking Dead). Many of the shows I continued to watch I found I could watch the next day on Hulu, of which I was a subscriber. I also found many new shows that rivaled the quality of network and cable shows, even premium cable shows, on Hulu and Netflix. So, I made the decision to cut the cord.

Currently, I subscribe to Netflix, Hulu, Amazon (a bonus of my Prime shipping subscription) and HBO Now. The only show that I currently watch but cannot get on these services is AMC’s Better Call Saul. Well, that was the case until this week. Charter, the cable company in my area, is offering their version of the Sling TV service called Charter Spectrum Stream. For $20 a month you get some popular cable channels (TBS, FX, ESPN, and AMC among others) plus either HBO or Showtime. So for $5 more a month I can get HBO plus some other cable channels including AMC for Better Call Saul. I can then cancel HBO Now. One of the other upsides to the service is that you get the local channels (even the alternate HD local channels that no one ever watches). This was great for me since, even with an antenna, I couldn’t get any local channels over the air (not entirely true. If I touched a co-ax cable to the window frame and grounding the signal, I could get 3-4 local channels. Trust me, it works).

This is almost TV as I want it to be. I am paying for the channels I watch the most and can watch my shows whenever I want without the added cost of a DVR. It will be interesting to see how this continues to evolve over the next few years as more and more people cut the cord and opt to watch TV in non-traditional ways. The only thing I have yet to figure out is how to watch Cardinals baseball this summer (without using MLB at Bat and a DNS routing service). I think sports will be the last hope that traditional cable and satellite subscriptions have. Once the various leagues wake up to the potential of offering sports without a cable subscription, I will be set. But I’m not holding my breath.

This past weekend SNL took on the popular podcast Serial with a brilliant digital short. Cecily Strong does a great impression of host Sarah Koenig. The spoof investigates the story of Kris Kringle, an elf who allegedly leaves presents in people’s homes. Watch it below.