You might have noticed that I had several test posts today. Normally, I do testing on a local server, but the issue I was trying to track down was a problem with my webhost. I had no other option so I said, F it. We’ll do it live.

All humor aside, the problem I was having was that YOURLS, my URL shortener that posts new blog posts automatically to twitter with my novelty shep.in urls, was not working properly. It was not able to actually write the URL to the YOURLS database. Basically, this is because Host Gator has mod_security enabled. In the past this hasn’t really been an issue because they would just whitelist the applicable rules. Unfortunately, the rules they had whitelisted were no longer working and YOURLS was failing.

After several trouble tickets back and forth, I finally decided it wasn’t worth it to host my URL shortening domains (shep.in and tvtalk.it for Let’s Talk About TV) with Hostgator. It was becoming too much of a hassle to ensure that everything was working properly. Even though I usually love Host Gator, I decided to move these domains to A Small Orange. Their Tiny Plan, which is all I need for URLs that redirect, costs only $25 a year. Well worth not having the headaches of making sure the mod_security rules continue to work.

The only thing left to do is wait for GoDaddy to change the nameservers on tvtalk.it (it has to be accepted by an Italian registrar before the changes can be made, which takes up to 5 business days). Actually, I will have to wait longer. Because I was not aware there was this waiting period, I changed the nameservers to A Small Orange’s. I’ve since decided to sign up at Zone Edit and use their nameservers, that way if something like this ever happens again I can just change the A record for the domain. So that can be up to an additional 5 business days.

So, sorry for the tests. I believe I have everything figured out fine now and you should not see anymore test posts in your feeds and/or twitter.

You all know that I love TV. In fact, I love it so much I created a new site dedicated to all things TV. I present to you Let’s Talk About TV. There are still things I am tweaking, but I decided to make it public yesterday. Many of the posts were imported from here but expect a lot more frequent posting. I have a few good ideas on what I want to do with the site, I just hope I can pull it off. I’m hoping if I’m able to do a few of them out of the gates I will have a bit of momentum and the rest will come a bit easier (being vague on purpose).

So, why am I starting this site? Well, as I said, I love TV. I’m tired of posting about TV here and there always seems to be a lot more about TV that I want to post. Also, I need to take my mind of politics. You might know I run Grand Old Parody and I need to have something else to occupy my time. Politics is too stressful. I need something fun!

Anyway, go visit the site, look around, and if you’d like, subscribe. I hope you enjoy it!

After reading Owen’s post about Twitter Influence there was a brief discussion in the Habari IRC channel about who people follow and why. One part of the conversation was about celebrities. One person in the convo didn’t follow any celebrities. Owen follows just one. I, however, follow 50+. That got me thinking about why I follow these people and how I’m actually using Twitter.

First off, I want to point out that I am not a TMZ, Perez Hilton, US Weekly, People celebrity stalker. In fact, if you look at the celebrities I follow you would find a bunch of names that rarely, if ever, appear in that type of celebrity drivel. The celebrities I follow are people from TV show, music, and movies that I really enjoy. Their updates are usually really good and provide me with entertainment. Denis Leary always has great one-liners. Rob Lowe embraces his fans and frequently talks about his role on The West Wing. Nathan Fillion and Colin Ferguson are just regular guys that tweet just like anyone else. Roger Ebert provides thoughtful political and film essays. Louis CK posts clips from his very funny show and tour dates for his stand up.

The thing is, I get quality tweets from most of these people. If I didn’t, I wouldn’t follow them. Sure there might be a few on there that don’t update, but for the most part they all do and I enjoy most of their tweets. It’s gotten to a point where I enjoy their tweets more than most of the other non St. Louis people I follow. Twitter has evolved from a place where I can see what other people are currently doing to a place where I can get info on my favorite TV shows, movies, musicians, and actors. I still enjoy seeing what my fellow St. Louisans are doing, but that’s about it. I used to enjoy reading what other people were up to or things they found interesting, but that has definitely changed, and I can probably pinpoint two reasons why that has changed.

The first reason is I started following too many people. I follow a lot of people but the people I follow, I follow for a reason. This has disadvantages though. The people I tend to follow update more frequently. Follow a lot of heavy users and statuses begin to fly by one right after another. Even though I find what they have to say interesting, I can only read so many tweets before they are lost forever in a never-ending stream of unreadable text. After a while of not being able to catch up, these updates become noise and provide nothing meaningful. The second thing is what I’m going to refer to as static. These are tweets that interfere with an otherwise good signal and will often contribute to the first issue. These tweets can be anything from a Four Square check in or a re-tweet to get into a contest for an Apple product (which I swear no one ever wins). Then you have paid tweets. That one bugs me the most. With celebrities and other high profile users, it’s easier to get high quality content without a lot of noise. You know if there is an update it’s not going to be a Four Square check in, a RT for a contest, or what song they are currently listening to. It’s going to be something that I find meaningful.

So, have you changed the way you use Twitter over the years? Do you still find it as valuable as before? Do you use it to make personal connections or more broad connections for your interests?

Everyone who has ever had a website disappear on them knows that having a current backup is essential. I have seen the poor soul who has had his server crash and lost years worth of blogging way too many times. It is essential that you have a plan in place for your backups. Let me tell you what I do for my backups. Note that I’m not saying you should do the same, this is just what I find easiest and it works for me.

Every Wednesday databases from several WordPress sites are emailed to me. I use the WordPress Database Backup Plugin to automatically email me the database backups each Wednesday at a time I set in the configuration. I then have filters set up in a Gmail account so that labels are applied automatically. When the Piece of Shep database comes in it goes directly to the Piece of Shep label and gets marked as read. If I want I can also have an on-demand backup emailed to me or download it directly from the WordPress interface.

Now that my database is safe, on the web and available to download anytime I want, how do I backup my files? The actual website files I download less frequently. I host several sites on my hosting account so a full backup is actually quite large, several gigabytes. Because of this, I only backup the actual files once every month. Using my host’s control panel I generate a full backup then download it to my iMac and then it is backed up to an external hard drive using Time Machine. I also have the full backups backed up over the net using Mozy. Because they are quite large in size, I only keep an archive of two or three of the latest snapshots. Since databases are typically small, (200-600 KB) I keep a much larger archive of those.

So that’s how I backup my sites. What about you? Have you ever lost an entire site and years worth of work? Do you have a backup plan in place? If so, how often do you backup? My motto with web hosting is always plan for the worst because when you don’t, that’s when the worst happens.

I recently signed up for Clicky Web Statistics, a great looking real time stats package. I’m nuts about statistics on my website but found Google Analytics to be lacking. I want data in real time, not a day later. I also use Mint but decided to start looking for something not self-hosted. I used the free trial of Clicky for a few days before I was sold and purchased a plan.

The stats that are provided are the type of stats you’d find in most statistics software. Clicky presents it in a very appealing way. No more getting lost in the different menus and submenus of Google Analytics. Clicky is simple and intuitive, providing numerical and graphical stats.  It displays everything I want it to.  It tells me what search engines visitors are using, the terms they are searching for, their entry and exit pages, the time they are on the site, the browser, OS, and screen resolution.  If I want to see where they are going once on my site, I can see all the pages they go to.   I can even see a Google map of where they are located in the world.

The best thing about the stats package is that it’s all real time.  I’m not running a mission-critical business that needs stats right away.  I just enjoy seeing what is going on at my site(s) and any given moment.  Clicky makes it easy to do that and presents it in a way that is superior to other stats packages that I’ve tried. If you’re looking for a great affordable real-time stats package, I suggest signing up and giving Clicky a try. I don’t think you’ll be disappointed. There are a lot more features not posted in these screenshots. These are just the ones I like/use the most. 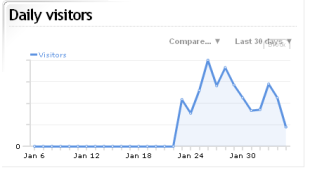 Graph of daily visitors (Numbers have been erased) 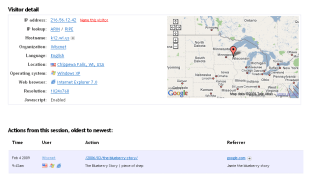 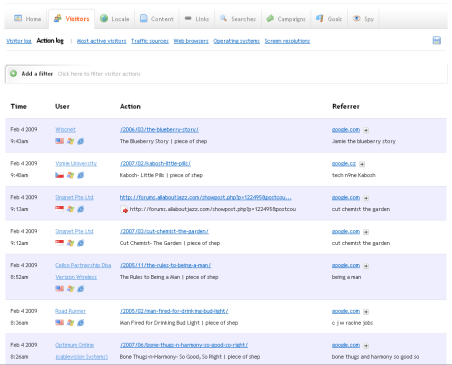 Actions users take while on my site 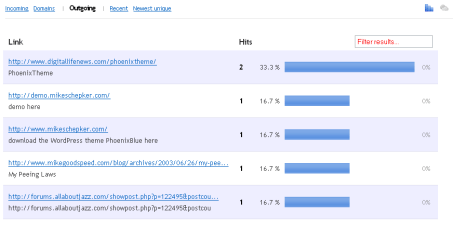 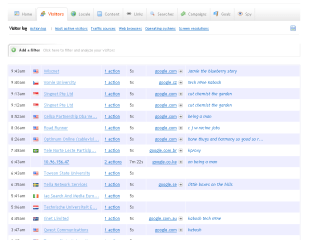