75 years ago this year Major League Baseball saw the first, and only, all St. Louis World Series when the National League Cardinals played the American League Browns. The National Baseball Hall of Fame has a great article about the series.

I was surprised to learn that the series took place entirely at Sportsman’s Park, the home of the Browns, and was played over six consecutive days. Can you imagine today’s games going back-to-back like that? It would never happen.

The series also saw baseball great and Cardinals legend Stan Musial, then 23, who went on to report to the Navy in 1945. I’m fairly young so my mind can barely comprehend how strange it is to see baseball players joining the war effort, another thing that I don’t think would happen today. A baseball player as a spy definitely wouldn’t.

With a war raging overseas and uncertainty overwhelming the nation, a unique World Series was taking place pitting two teams who shared the same home ballpark.

The 1944 World Series, considered a David versus Goliath matchup at the time, was an all-St. Louis affair featuring the prodigious Cardinals, a franchise having just won its third consecutive National League pennant, and the plucky Browns, the winners of its first American League pennant in its 43rd year of existence…

With no travel days needed, the 1944 Fall Classic was played over six consecutive day games from Oct. 4-9.

If you are a fan of baseball, and especially baseball history, go read the article. It really is a great read. 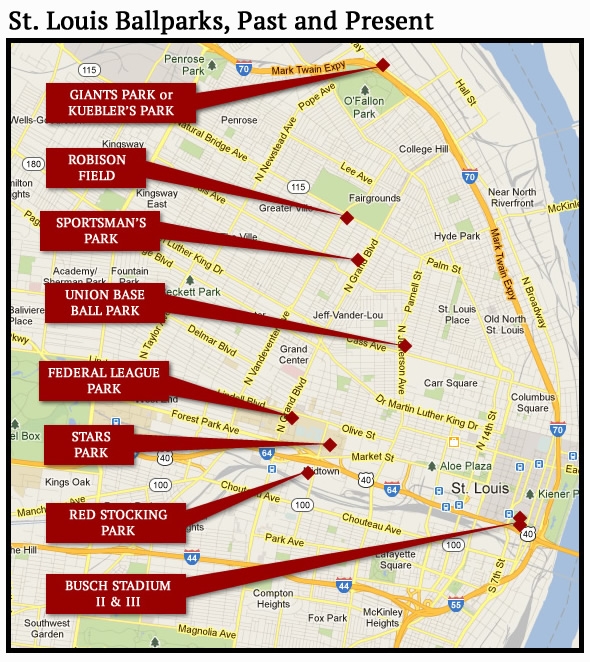 You would think that the two sides, Uverse and Fox Sports Midwest, would have come to some sort of agreement in the offseason. Well, if you thought that, you’d be wrong.

For the second season in a row, Uverse subscribers will not be able to watch 20 games, including tonight’s versus the Reds. In fact, 7 of the 20 that are blacked out are games against division rivals like the Reds, Brewers, and Cubs.

Here’s the list of games being blacked out by Uverse.

If you’re going to stay with Uverse, call 1-800-288-2020 and ask for customer retention. Tell them you’re unhappy about the situation and demand a discount. If they are going to screw over their subscribers, hit ’em where it hurts… in their bottom line. Of course, it would be better if you cancel completely (not an option for a lot of people, I know).

“Do I want to be in St Louis forever? Of course. People from other teams want to play in STL and are jealous that we are in STL because the fans are unbelievable. So why would you leave a place like STL to go somewhere else and make 3 or 4 more million a year? It’s not about money, I already got my money. It’s about winning, that’s it”.
-Albert Pujols Feb 15, 2009

He reportedly signed a 10 year contract worth $255 million (which is $3-4 million per year more than what the Cardinals reportedly offered).

Starting this season, Fox Sports Midwest will carry all of the Cardinals baseball games. In the past, local channels would carry some of the games (KPLR, then KSDK). Because Fox Sports Midwest decided to carry all the games this year, they thought they could jack up the price for the channel (or for the rights to show those additional 20 games). Some companies did not agree. Most of the companies in dispute were small-time cable companies in rural areas. The major providers, such as the satellite providers as well as Charter Cable, agreed to the new fees. AT&T’s Uverse did not. They had months and months to come to terms, but they just figured it’s only 20 games, who cares.

Well, AT&T, one of your biggest Uverse markets is also the best baseball town in America. We want to watch EVERY game. We are some of the most loyal fans in all of baseball. By not showing those games you will be losing a lot of money from customers you’ve pissed off, either by giving them discounts on their bill or by watching them leave completely. Is it really worth it? I’ve already had one of your sales people offer me $25 off a month for the next 6 months and promise (and yes, I verified with him what he was actually promising) that the dispute would be resolved by today. Nothing like telling a lie to keep a customer, right?

As for me? Even with the discount offered, I think it’s time to say goodbye. I have been a Uverse customer for over 2 years and have watched them move the sports channels to higher tiers, increased fees for services, and now, take away games promised to air. I can take my business somewhere else where I will be sure to have access to every game.

UPDATE: In case you’re sticking with Uverse and want the discount (we’re missing games, time to hit AT&T where it hurts), call 1-800-288-2020 and ask for customer retention. Tell them you’re unhappy about the situation and demand a discount. I’ve seen some people get offered $15 off a month for 6 months, but they gave me $25 off a month. I wouldn’t go any lower than that.