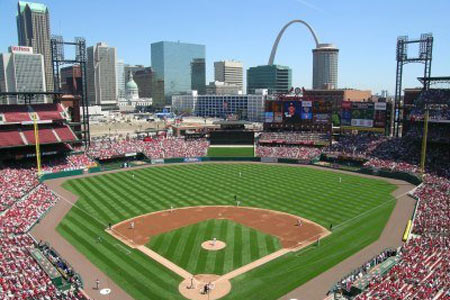 Today (unless it gets rained out by the major storms hitting the area this afternoon) is opening day for the St. Louis Cardinals.  It should be an interesting season for the Redbirds, that’s for sure.  We have many new faces on the team, most of them young talent.  It’ll be nerve-racking to see how the Cards do this year with so many young players.

The time is approaching. You can hear it swimming through the air. Closer and closer. You hear a crack. A sound so familiar, but you can’t quite figure out where you’ve heard it before.

Time passes. The trees are bare. Then the noises get louder. This time the crack is accompanied by a thud. It sounds like a broom beating on an old rug. Again, it is a recognizable sound, but you still can’t figure out where and when you first heard it.

Time passes and snow covers the ground. The noise comes back, and this time, every one of your senses is bombarded by blurry visions, sounds, and smells.

The snow melts. The smells get stronger. You know what that smell is. It is a smell that you recognize as one of your first childhood memories. Visions of sunny days fill your mind. The sounds are back, and this time, you recognize them. You close your eyes and live in the moment. You look around. There are people everywhere. You smell stale beer. The kind of smell that could only come from years and years of spilt beer staining concrete. But this is not a bad thing. It reminds you of all the good times you’ve had, and the great ones to come. The noise is deafening. You hear people cheering. You hear loudspeakers, cracks, and thuds. A new smell comes over you. You inhale. When you do, memories of watching your dad cut the grass when you were little float forward. Yes, the smell of freshly cut grass overpowers the stale beer smell. Now the musty smell of wet dirt travels through the air to where you are. The loudspeaker explodes with sound. You hear names being called. People cheer. You feel like you are there. At that moment. At that place.

Time passes. The grass turns green. All those wonderful smells, visions, and noises come back. This time they are as strong as ever. It is time. You don’t have to imagine anymore.

The day comes. You stand in line, smiling. You talk with other people enthusiastically. You talk about how this is the year. You never give up hope. Neither do they. For all your differences, this is the one thing you have in common. The one thing that binds you, and fifty-thousand other people in the vicinity, together. Nothing can taint this feeling. Not talks of financial problems or drug problems. This is the perfect moment. You walk in. Your heart beats swiftly. You hear the loudspeaker. You hear those familiar names. This time it is real. You smell the great smells of stale beer, cut grass, and wet dirt. You hear cheering. You see the color that dominates the town. The color you are wearing on this day, at this moment. People continue to cheer. Thud! That?s all right. Everyone knows to lay off the first one. Then you hear it. CRACK! A line drive base hit. And the season is under way. What a great one it will be.
Dedicated to Baseball, and those that made it great. The ones that are alive in person, and those that are alive in our memories.

As you probably know by now if you’re a WordPress user, WordPress 2.5 came out today.  Along with that, WordPress.org received a redesign.  I won’t say much about the new version, as it seems to be the same, except an ugly admin redesign.  I will however point out that I have a new theme up here.  It probably won’t stay up too long, but I figured it’s a great theme for the season.  Cardinals opening day is Monday and the baseball season will be underway.  Just wanted to throw up a theme that celebrated the season a bit and this theme I thought was very elegant looking.  Anyway, let the baseball commence!

I don’t listen to rap. I used to. In the ’90’s I listened to Tupac, Snoop, Tha Dogg Pound, etc. That time has come and gone. I still will listen to rap from the 1990’s. It was a good era, in my opinion. Today’s rap sucks. It’s the commercialized bubble-gum, carbon-copy crap on every station. I am an elitist. I’m not afraid to admit it. Yes, I think everything I listen to is better than what you listen to. If you listen to something I do, then I’m still more hip than you because I listened to it sooner. Yeah, I know. I just can’t help myself. I love to recommend good music and show off my superior musical taste.

In conversations when asked what I listen to I always answer, “Underground hip hop.” I have to make sure to set myself apart from the heard of crappy rap listeners. I don’t listen to underground just to be different. Not at all. I’ll be the first to say I think an underground artist sucks (sorry Immortal Technique). If the artist doesn’t have good lyrics, flow, and production, then I’m not going to be a fan. Just because you’re underground doesn’t mean I’ll automatically like you. These people are just the same as people who follow the mainstream rappers blindly. Then I came across this post in the QN5 forums that sums up these thoughts perfectly. It was written by Kno of CunninLynguists:

Many of them listen to “underground rap” simply because its the antithesis of whats on the radio and they have some friends that are into it so they aren’t completely alone.

So…whats the opposite of super clean, crisp beats with rappers with little to no substance but great flow and charisma rapping about rims?

Super muddy, overly-wordy, poorly delivered raps about science over crusty boom-bap…so thats what they go for, regardless if its dope or not. Many “underground heads” are just as much sheep as your average pop radio listener, truth be told…and your average underground rapper is just as much of a gimmick as their mainstream counterparts. If you’re biggest selling point is “you ain’t like that mainstream shit” you need to stop rapping immediately.

QN5 is crusty BUT clean, substance-filled BUT not TOO over-your-head, charismatic but not ALL swagger. Complicated lyrics but…pop-worthy hooks? It makes your average “followers” head explode, honestly.

QN5 appeals to people with their own personal tastes who simply like good rap music, period. Not many of those left.

This is the music I’m gravitating to more and more. QN5 is a high quality label that puts out amazing music, and to be honest, they’ve turned me on, directly or indirectly, to other music, most not even hip hop. Other underground artists were/are like that too: Jurassic 5, Binary Star, etc.

I’m not totally turned-off by mainstream rap. Kanye has some really good songs that convey the same things as my underground favs. The thing is, I’ve noticed that some of my past underground favs I’m no longer enjoying. I guess my musical taste is changing with age. I used to be a huge fan of Tech N9ne. I still think he can make good music and will still buy his music, but I don’t feel the excitement I used to feel with his music. I don’t know. Why can’t the world be more like QN5 and their passionate artists?

I installed the Ubuntu Hardy Heron release onto my desktop via wubi. This isn’t a how-to on how I did that. You don’t need a how-to, the installation was that easy. You burn the cd, put it in the tray and follow the installation procedures that follow. It’s like installing any other program in Windows. Once you’re done, you reboot and choose which installation you want to run, Windows Vista or Ubuntu in my case. The install doesn’t touch your Windows files, doesn’t change your boot record, and if you want to get rid of your Ubuntu install when you’re done trying it out, you just remove it from Add/Remove Programs in Windows’ Control Panel like you do with any other program. I’m quite pleased by all of this.

As for Hardy Heron, there isn’t much new to talk about. It’s very similar to Gutsy Gibbon that came out 6 months ago, with the addition of some new program defaults (Transmission for Bit Torrent, among others) and some under the hood changes that a casual desktop user won’t notice too much. Ubuntu is definitely making it easier and easier to transition from Windows to Linux with each release. If you were ever afraid to take the plunge, now is your best time. You have nothing to lose by installing it via wubi and trying it out.

Last night and today, with the help of the good folks in the Habari community, I ported the PhoenixBlue theme that I released for WordPress over to Habari. You can check the theme out in action over at MikeSchepker.net and download it from here: Download PhoenixBlue for Habari Now

I’m sure there are some things that aren’t quite up to snuff, so if you want to throw in a helping hand and join a community of passionate coders and designers, visit Habari’s website or join us on irc at irc.freenode.net in the #habari channel.